Due Diligence in Public Procurement: The Case of the Gwanda National Solar Project

Commemoration of the African Anti-Corruption Day 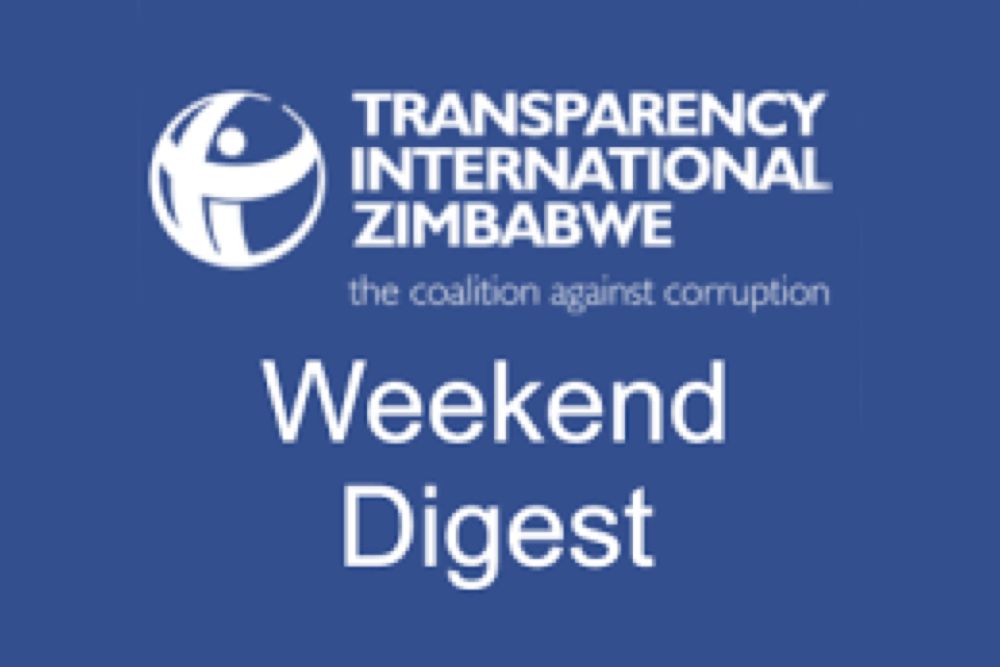 The African continent possesses 10 percent of the world’s oil reserves, 30% of the world’s mineral reserves, 40 percent of gold ore, and no less than 95 percent of platinum group of metals and 8% of the world’s natural gas. Extractive resources account for almost one quarter of Africa’s GDP and about 3.5 billion people live in countries rich in oil, gas or minerals. However, most often these resources have become a source of conflict rather than opportunity as most resource rich countries in Africa suffer from poverty, corruption, and conflict stemming from weak governance. This has led to what some people have termed “resource curse.” Zimbabwe is equally endowed with mineral resources which are estimated at over 60 minerals. Sadly, despite the rich and diverse minerals resource, the Zimbabwean economy has endured two decades of economic decline, which can be attributed to several factors such as bad governance and corruption. The mining sector has remained an enclave economy, detached from the rest of the economy, and a major source of conflict, displacements, land degradation, unfair labour practices and illicit financial flows which the late former President of Zimbabwe, Robert Mugabe attributed to the $15 billion lost from Marange Diamond fields between 2009 and 2015. The statement raised a lot of attention from both Civil Society Organisations and the media, but nothing has been done to date to track or account for the lost revenue.

As the African continent and Zimbabwe commemorate the 4th African Anti-Corruption Day on the 11th of July 2020, it is important for anti-corruption stakeholders to introspect on the challenges and successes in the fight against corruption. With a strong constitution, Constitution of Zimbabwe Amendment (No. 20) Act that outlines basic principles of good governance, public finance management and  being a State Parties to various regional and international anti-corruption conventions, where are we dropping the ball as Zimbabwe and why are we not winning the fight against corruption? On this eve of the African Anti-corruption Day, TI Z explores one of the avenues in which the country is losing revenue. Revenue that could be channeled towards uplifting the lives of ordinary citizens. Year in and year out the country continues to experience leakages through public procurement. Let us look at the controversial Gwanda National Solar Project.

NB: This Weekend Digest will not delve into the court proceedings of the matter involving Intratrek Zimbabwe.

According to the first report of the Portfolio Committee on Mines and Energy presented to the National House of Assembly following the Committee’s site visit to Gwanda on 28 February 2018, various procurement procedures and provisions of the then State Procurement Act Chapter 22:14 were violated in the awarding of the tender to Intratrek. Evidence presented revealed attempts to frustrate and push out the original winner of the bid. Prior to conclusion of the award, an accounting officer from the Zimbabwe Power Company (ZPC) recommended an additional award of the tender to China Jiangxi and Intratrek. This was in contravention of Section 31(1)(n) of the repealed Procurement Act, Chapter 22:14 which prohibited the negotiation of submitted bids. This first tender faced a number of challenges leading to its cancellation.

In 2015 a second tender was then floated and eventually awarded to Intratrek. On the 23rd of October 2015 a contract for the Gwanda Solar Project worth over USD183 million was entered into between ZPC and Intratrek Zimbabwe with its technical Partner, Chint Electric Company. 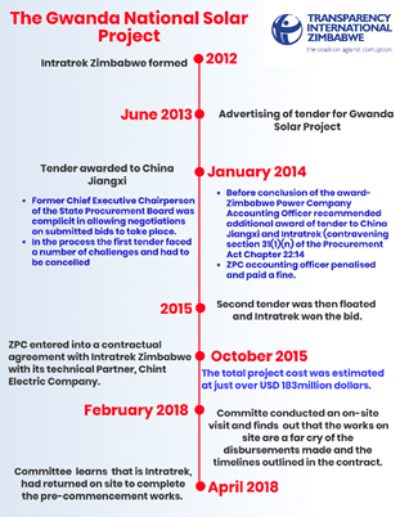 Realising that Zimbabwe had several uncompleted projects which had the capacity to bridge the power shortage gap, the Parliamentary Portfolio Committee on Mines and Energy conducted a case study using the Gwanda National Solar Project. On the 28th of February 2018, the committee went on a site visit to establish progress on the project.  The committee found out that “no meaningful progress had be made in its establishment largely due to bureaucratic bungling and corruption, among other issues.”

Based on the evidence gathered by the Parliamentary Portfolio Committee in 2018, the tender was awarded to a politically exposed person who influenced various senior government officials. Further, there was no due diligence done pertaining to the company that was awarded the contract. For example, it was later revealed that the Managing Director of Intratrek Mr. Wicknell Chivayo had a previous criminal record and conviction which would have precluded Intratrek from being awarded the tender in terms of section 34(f) of the State Procurement Act.  Against all this background, the government is contemplating re-engaging Intratrek to finalise the project.

Red Flags Concerning the Awarding of the Intratrek Tender

“….after the award I then went to the Minister, Hon. Mavhaire and I explained to him that in the beginning the whole solar project was my brainchild”- Intratrek Managing Director to the committee

Section 308 (2) of the Constitution of Zimbabwe provides that it is the duty of every person who has custody or control of public funds to safeguard the funds and ensure that they are spent only on legally authorized purposes and in legally authorized amounts. It then becomes a cause for concern when public officials engage in irregular, fruitless and wasteful expenditures resulting in loss of public resources. Transparency International Zimbabwe is worried that, in the case in point, there was no value for money considering that the whole project was given to a company without financial and technical knowledge and no evidence that the tendering process was competitive and transparent. Failure to undertake due diligence on companies awarded public contracts has devastating consequences on the people of Zimbabwe who continue to suffer as a result of inadequate electricity supply. The shortage of electricity has impacted heavily on individual households, livelihoods and industrial capacity utilization which is currently below 35%- ultimately contributing to the high employment rate in the country. Women are the most impacted as they look for alternative sources of energy in which most of the alternatives impact negatively on the environment leading to climate change.

As we were discussing with colleagues on the Gwanda National Solar Project, the following key questions remain unanswered;

Until and unless the government is in a position to provide answers to these pertinent questions, the initial and current awarding of the contract to Intratrek will be in contravention of the laws of the land including Section 315 of the Constitution of Zimbabwe and the Public Procurement and Disposal of Public Assets Act of 2017. 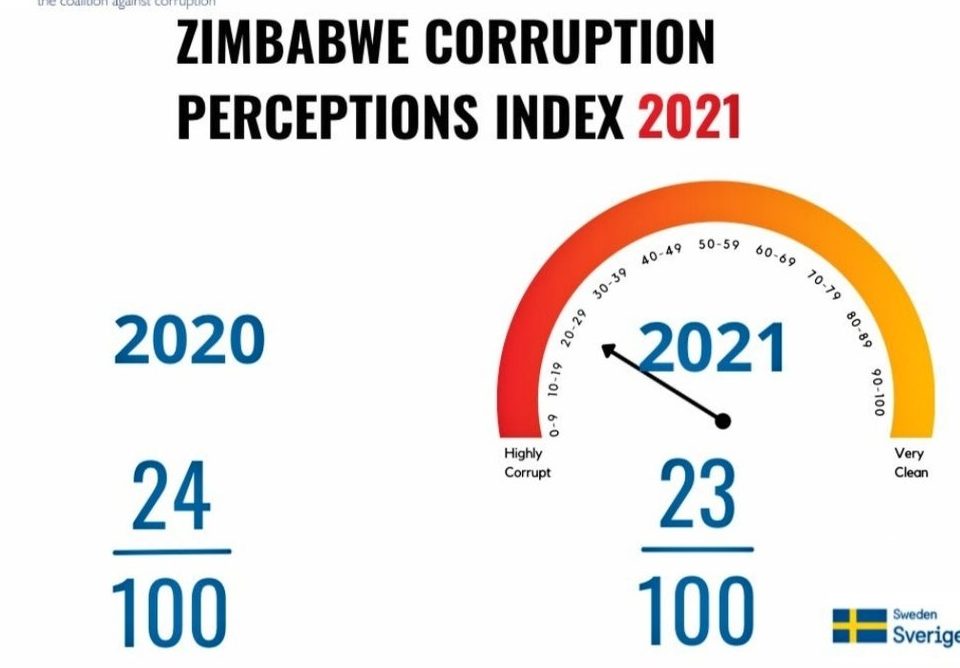